Last year I made a Shiri wrap and gave it to my daughter for Christmas.  I noticed my mother-in-law having an eye for it and she kept running her hands over it.  So I made another one, almost identical that I plan to give her for Mother's Day.  I got it off the needles Friday.  It took 4 Covid weeks (that means working on it about 10 hours a day because what else have I got to do) to make it. 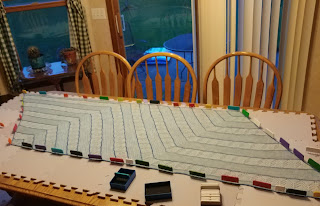 I blocked it on the kitchen table Saturday.  We had to eat our meals at the kitchen counter for a little while. 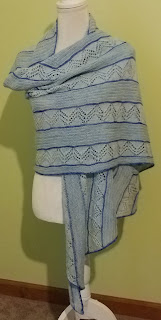 I took these pictures this morning. 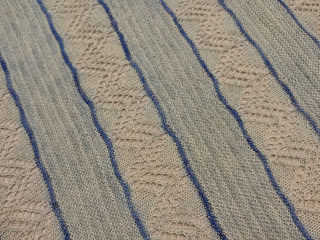 For those who want the particulars, the pattern can be found at Ravelry.com.  It is called Shiri by Ambah O'Bien.  The yarn is Winter Light Lace from LuckyVioletColorCo.com.

The yarn was a Christmas present from my son in 2018. When he asked me what I wanted for Christmas I gave him the URL for a page on the Lucky Violet Color Co. web site. The only instruction I gave him was 'no pink.' I did not tell him what yarn base to select.


The Lucky Violet Color Co. has a lot of yarn bases and they dye the yarn to order. My son apparently studied this situation and decided that the best option was to get the most yardage per skein. I think this reasoning process may be an anecdotal example of the difference between the way a non-knitter (especially a guy non-knitter) and a knitter look at this sort of thing. So he picks the Winter Light Lace that is nearly cobweb weight (1300 yards per 100 gram skein). And gets me six skeins, two each of three different blue shades.
I wasn't quite sure what I was going to do with this very light weight yarn. I was a little intimidated. What was I going to do with 4-1/2 miles of light lace weight yarn? I do a lot with fingering weight yarn but I don't venture into the lace weight very often at all. On the bright side, the fiber in this yarn is wonderfully light and soft; he made a great choice in that respect. When I found the Shiri wrap pattern I saw a way out of the predicament. I was able to use two strands together to achieve an ordinary lace weight.
The pattern is not too difficult; a little simple lace alternating with bands of garter stitch. The construction calls for making two identical large triangles.  Then the triangles are joined together with a three-needle bind-off. The only challenge is the I-cord border around the whole thing; not because the I-cord is difficult, but because it is a l-o-n-g way around the wrap, like about 1200 stitches.  The I-cord method requires working three stitches to bind off one stitch so 3600 stitches to finish the cord edging.
The only problem is that I still have enough yarn to make another one, even after the one I made earlier for my daughter. If I ever send my son to a yarn web site, I'll do a better job with the instructions.

Posted by Knittingfool at 7:10 AM No comments:

1.  Asian flu pandemic 1957.  Well, I was a toddler so I don't recall so much.  Apparently that year measles were a greater threat to me.  Measles hospitalized me; I was packed in ice to reduce my temperature.

2.  Hong Kong flu pandemic 1967-1968.  I remember this one well; I was a teenager.  We were on vacation at Carlsbad Caverns.  In a crowded cafeteria we shared a table with a woman from the West Coast who was sniffling and snuffling.  After we got home we all came down with the flu.  It was bad.  My Dad took it the worst.  He was a three-pack-a-day smoker and he ended up in the hospital with double pneumonia.  It damn near killed him.  No ventilators then, just an oxygen tent.   In the USA 100,000 death were attributed to the Hong Kong flu.   There were a million deaths world wide.  If they quarantined anyone I never heard of it.  Businesses did not close.  Life went on.  I don't remember any crisis mentality.

4.  CCP virus pandemic.  Of all the many names for the current pandemic I like CCP pandemic best of all:  Chinese Communist Party pandemic.  I found that names in the Epoch Times.  Because I am retired my life in the 'lock down' is not much different than before.  Just glad I live in a rural area where I can go outside and walk around all I want.  The biggest differential I have noticed between this pandemic and the earlier pandemics is the damn, awful 24/7 news coverage.  So much jabbering from people who have a lot of opinions and not enough facts or good sense.  Unfortunately my husband insists on watching one of the business news channels all day long.  I expect people discussing business to be rational.  Instead there is way too much hair-on-fire disinformation.

Since everyone else is jabbering, here's my bit:  I think the lock down has reached the point where the Law of Unintended Consequences is taking over.  Those Consequences will soon be more harmful than anything the lock down is intended to prevent.  The effects on mental health and the economy are becoming a greater risk to our well being than the virus.

Posted by Knittingfool at 5:32 AM No comments:

I ordered a new laptop.  While I waited for the new one to arrive, I got along with some work-arounds.  Ctrl-Alt-Del got a workout.  To open applications I had to use Task Manager\File\Run New Task.  That works well if you can remember the application name that the System expects.  There was one application, a scanner manager, that I never did figure out, even after a long search of the registry.

Wednesday the new laptop arrived.  I was pretty good to myself:  1Tb Solid State Drive and 1Tb conventional hard drive.  Plenty of memory.  The graphics card is not the very best, maybe in the tier just below because I don't want the kids coveting this laptop for gaming.

I made a mistake during the set up which resulted in my C:\Users account name being different than what it had been on the old machine.  Fixing that in the registry took a lot of time because that file path appears in many registry entries.  I wish I could have found an easier way to change that.  I can't be the first person to have that problem.

I have spent two days migrating into the new machine.  I used an external hard drive to move files.  I audited the files to ensure the same number of files were on both the old and new machines and in all the same places.  Setting up email was not too difficult.  I checked and double checked all my connection settings.

Most everything went well until this afternoon when I tried to get into my Google Adsense account.  The Google Login security raked me over the coals.  Being on a new machine probably raised some flags.  It doesn't help that I have two Google accounts; that part of the problem is my fault.  I ended up in a loop that started with Google Security wanting to verify my account by re-entering my password.  I submitted  the password; it gave no indication that there was a problem with the password.  It looped me back to the screen where Google Security wanted to verify my account again.  And the loop just kept repeating.  So I selected the "Forgot Password" option to try to get out of this loop.  After I changed the password, it put me through the same verification loop as before.

I futzed around with Google Security for over an hour.  If Google Security ever steers you toward an option to use your phone with a screen lock to sign into your account, please, please please don't do it.  It just put me into a similar loop and when I found the setting to turn that feature off, Google had warning messages designed to add fear to my loathing.  I was so frustrated with all the rigmarole Google was marching me through.  Has the testing of Google's Security user interfaces reached the level of human trials?  Was I in the human trials?  Was someone at Google getting paid to torture me, take notes and laughing about it?  I was in such an internal storm that I don't even know what I did to finally get into Adsense.

This was not my first Google goat rodeo; probably won't be my last.  I need some wine.
Posted by 1knittingfool at 4:14 PM 2 comments: